The Huawei P9 has long been forgotten. Back in its prime, this flagship phone was ranked among the best phones money could buy – mainly for its camera performance and lightning-quick fingerprint sensor. Sadly, that time has since passed, having been discontinued by the manufacturer and replaced by several new iterations.

Three P-branded phones have appeared since the P9’s launch. Sadly none of them offers similar value for money, with the most recent flagship Huawei phone, the P20 Pro, starting at £600. Of course, this offers a substantially better smartphone experience, with a triple camera arrangement and the latest Kirin chipset but if money is a little tight, there are some better alternatives to be found.

Having a DSLR is great for taking pictures, but not a practical option for taking your everyday photos. However, the shooter I always have on me is my smartphone. This is why Huawei has teamed up with century-old, and much revered, German camera and optics manufacturer Leica to provide a powerful rear dual-lens camera.

This, to me, is a perfect collaboration, where the perfect smartphone might indeed by the Huawei’s P9. So, I am intrigued to see how it stacks up against other high-end smartphones that also have a powerful camera.

So what exactly does this Leica collaboration mean? Turn the P9 over and you’re greeted by two intriguing camera lenses on the rear with Leica branding. The camera enthusiast in me wishes Leica’s actual famous red logo was used, rather than simply typed out in a non-descript typeface, but it’s a minor bugbear.

This isn’t the first flagship to include dual-lenses – the HTC One M8 had a Duo Camera and, more recently, the LG G5 has two rear lenses as well – but the P9 utilizes its dual-lenses in a completely different way. It captures images at up to 12-megapixel, but one is a standard RGB sensor, while the second is monochrome-only. Leica’s had a long history of creating monochrome-only cameras, it’s most famous being its $8,000 M Monochrom camera, and it brings a number of benefits when it comes to capturing more light and improving the camera’s contrast levels.


This is because the sensor isn’t encumbered with having to capture RGB light levels, and Huawei claims its monochrome sensor can capture up to 200% more light. It also creates a truer result when compared to black and white film photography, and a superior end result compared to converting an originally color image into black and white. 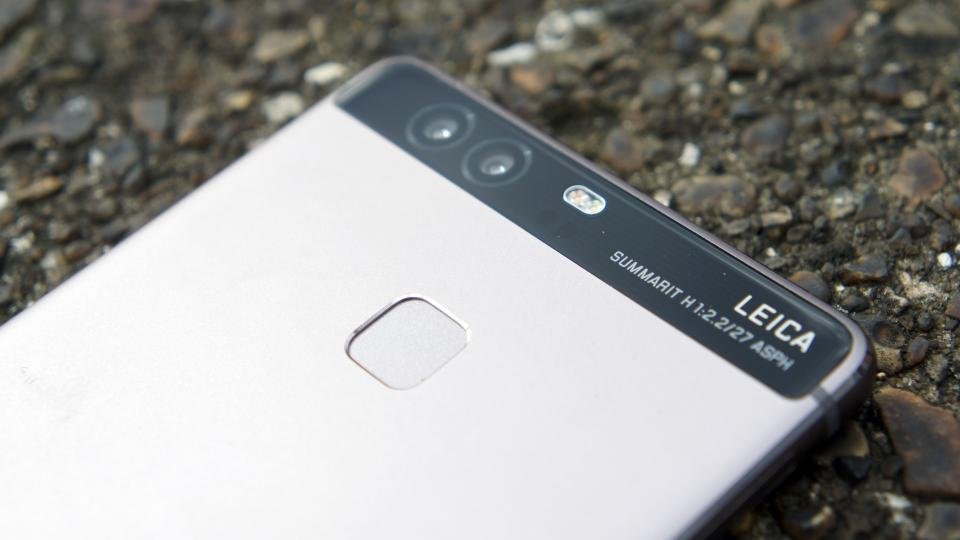 That’s not all, either, as it can also be used in conjunction with the color-capable sensor to combine the light information from both cameras, supplementing the color sensor with the added contrast and image detail from the monochrome sensor.

It does have a few downsides, however. For instance, each pixel only measures 1.25um in each sensor, which isn’t quite as large as the 1.4um pixels found on the S7. Larger pixels are important for capturing more light, resulting in better pictures under low lighting conditions. The P9 also doesn’t have any optical image stabilization, which you might have expected given the emphasis Huawei’s placed on the camera.

The f/2.2 aperture lenses also aren’t the largest we’ve seen recently, as the Samsung Galaxy S7, for example, has an f/1.7 aperture lens. A lens’ maximum aperture not only lets you get more creative with background blur – also known as ‘bokeh’ – but it also limits how much light is able to reach the sensor. In the case of the Galaxy S7, the lens diaphragm is able to open wider allowing more light to reach the sensor, improving low-light performance. 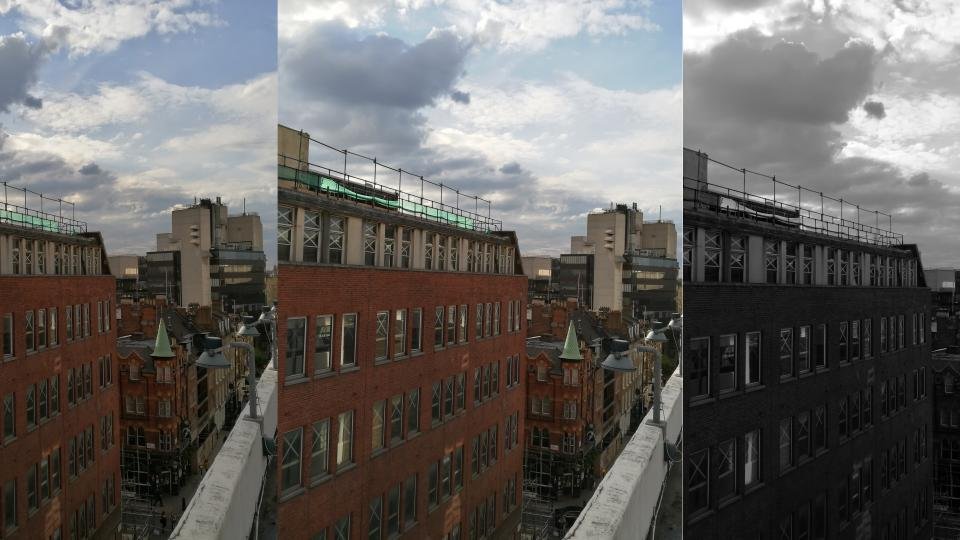 ^ A breakdown of the same shot in HDR (left), Auto mode (center) and monochrome (right)

However, our indoor test shots showed some of the P9’s limitations, particularly when it comes to low-light photography. It did well in keeping noise levels down, but shooting without flash resulted in some rather soft photos due to a bit of camera shake. The flash helped with the shutter speeds but resulted in less natural colors. With our studio lights turned on, image quality fared much better, with excellent color reproduction and plenty of detail. ^The P9’s indoor photography was good, but be wary of camera shake due to the lack of optical image stabilization

When you consciously choose to shoot in black and white, it causes you to seek out different photography opportunities or to frame the world differently. In this regard, using the Monochrome mode was particularly enjoyable. 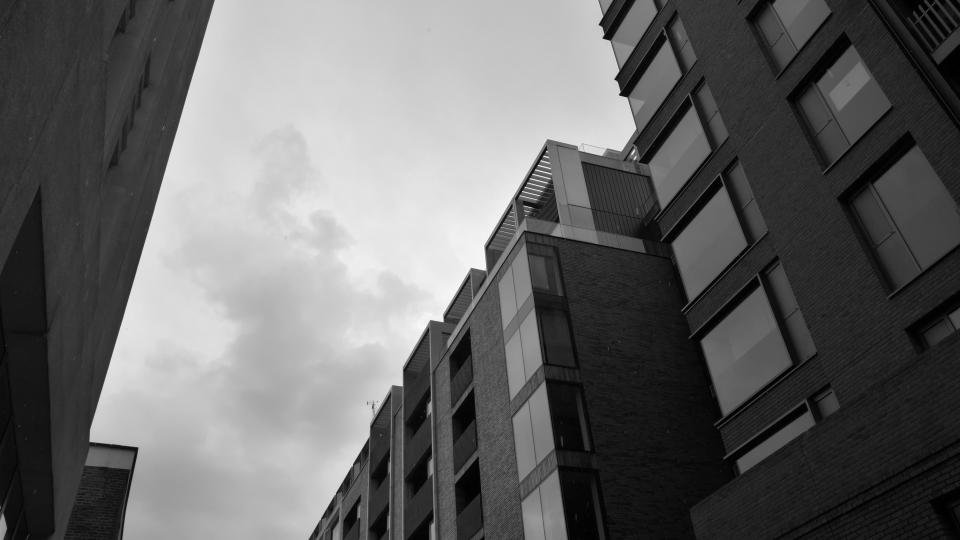 ^Shooting in monochrome made for punchy, dramatic images

There’s no shortage of additional modes, either. Some are more useful than others, but the Aperture mode is by far the most useful, as this lets you take photos with different depths of field. Once you tap an area to focus, you can then use a slide adjustment to change the aperture all the way from f/0.95 to f/16. This is a purely software-based adjustment, however. As mentioned earlier, the lenses only have a true aperture of f/2.2 that is non-adjustable due to a lack of an actual lens diaphragm. 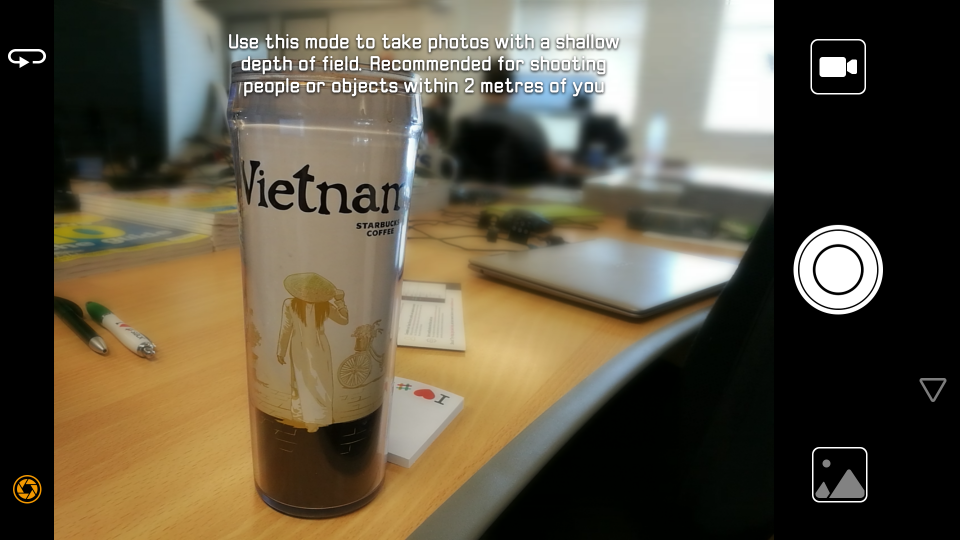 Overall, the mode works well for the most part, although the extremely shallow f/0.95 aperture makes for a razor-thin focus point, meaning it’s much more prone to misfocusing. Of course, a software-based aperture adjustment does nothing to change the shutter speeds attainable under low-light conditions.

Tellingly, the Aperture mode isn’t available when shooting using the Pro settings in the camera app. This is available by sliding up from above the on-screen shutter button and gives you manual exposure adjustments you would expect from a fully-fledged camera. These include ISO adjustment, exposure compensation, shutter speed, metering mode, autofocus mode, and white balance. 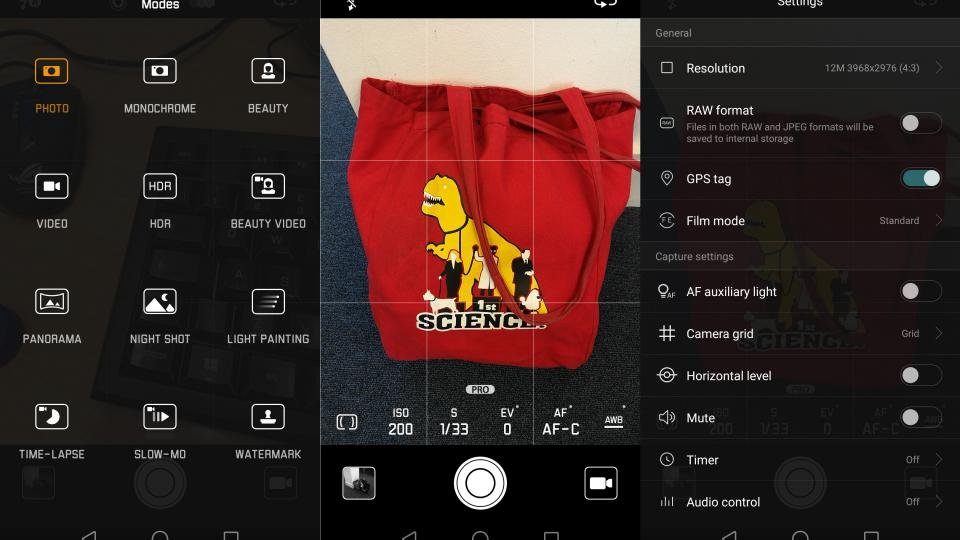 ^The Camera app has settings sliding in from every direction

As for the Pro shooting mode, the array of adjustments will leave those well-versed in manual photography feeling at home, but using the onscreen adjustment dials themselves can be slow and fiddly. There’s a reason why professional SLRs have multiple adjustment wheels. There’s no onscreen exposure meter to try and judge exposure, either, although the live view does adapt to reflect your changes. You will, however, find the RAW capture mode in the Pro’s right slide-in menu, which gives you better options for post-processing without nearly as much image degradation as shooting in JPG.