The iPhone 11R launch is just days away

The iPhone 11R is expected to launch alongside two other new iPhone smartphones (and a whole host of other products like the Apple Watch 5) at Apple’s September 10 event, which is now just a day away.

A successor to 2018’s ‘affordable’ (for an iPhone at least) iPhone XR, we’ve dubbed it the iPhone 11R for now, though that won’t necessarily be its name at launch. Don’t confuse it with the mythical iPhone SE 2, which we probably won’t see at the launch event: this is a scaled-back version of Apple’s upcoming flagships.

We’ve got more insight on potential names below, but more importantly, we’ve also gathered all the leaks and rumors we can find about the iPhone 11R’s design, specs and features.

Being an iPhone, and being this close to launch, a lot has been leaked, so there’s plenty to get stuck into. We’ll also be sure to update this article whenever we hear anything new, so check back regularly for all things iPhone 11R.

Cut to the chase

The iPhone 11R launch date is very likely to be September 10, during Apple’s official Q3 event, which is when the company typically announces new handsets.

Even before that became official, we predicted that it would be announced on September 10, as in the last few years the announcements have taken place on the Tuesday or Wednesday around that date.

However, the iPhone XR actually went on sale later than the iPhone XS range, with people unable to buy it until October 26 in 2018, so we can’t rule out a similar delay here. Though sources do suggest they will all go on sale at the same time this time around.

As for the iPhone 11R price, there aren’t any real rumors about that, but much of a price rise for the most basic model seems unlikely, so we could be looking at something similar to the $749 / £749 / AU$1,229 starting price of the iPhone XR.

One thing that we’re unclear on is what the iPhone 11R will actually be called, with one source pointing just to ‘iPhone 11′ (with the two more premium models being called iPhone 11 Pro and iPhone 11 Pro Max).

There’s also the question of whether ’11’ will be used, or whether Apple will opt for ‘XI’. Or perhaps the number will be dropped altogether and we’ll simply get the ‘new iPhone’ or the iPhone R.

The consensus so far is that the design won’t be changing much for the iPhone 11R, meaning you can still probably expect a notch and a similar overall look.

The one key difference that has been heavily rumored is the look of the cameras though, as these are now expected to sit in a square block at the top left corner, making them rather more prominent than the iPhone XR’s small single-lens snapper.

Most leaks so far show the more premium iPhone 11 models, but the video below gives you a look at the possible design of all three, complete with that camera change. You can see similar designs in another video, which used dummy units created based on rumors.

The source of this video above also claims that the iPhone 11R will be 150.9 x 75.7 x 8.3mm, which is identical dimensions to the iPhone XR. So if true then there really won’t be many changes at all.

Another difference could be the colors, with the iPhone 11R rumored to land in black, white, yellow, lavender and green shades, as you can see in the image below, showing shards of glass supposedly intended for the phone. 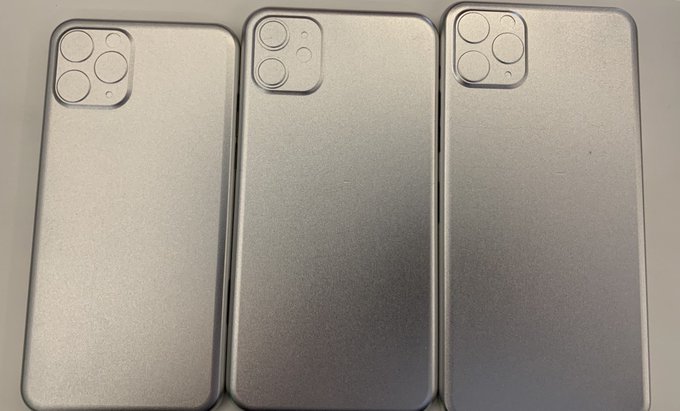 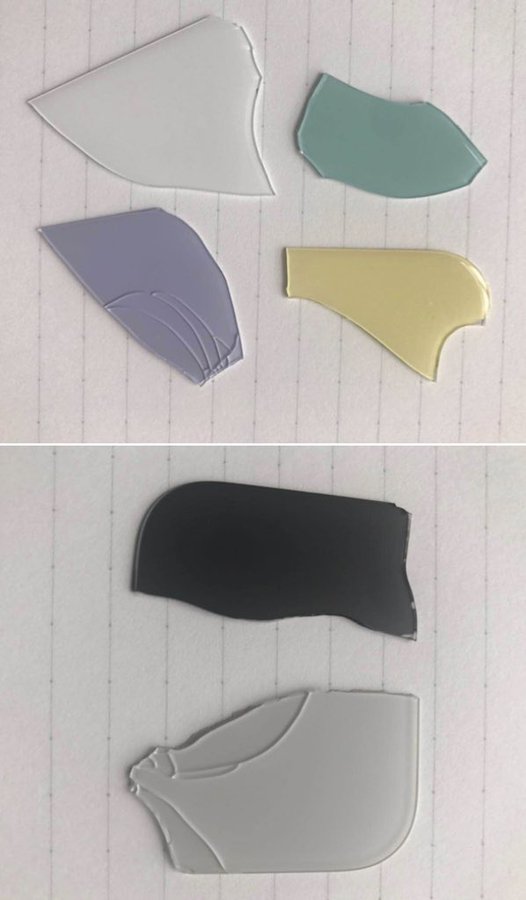 You can also see the possible design of the iPhone 11R again, this time in the form of case moldings. Elsewhere we’ve similarly heard talk of black, white, gold and dark green shades. There’s also the possibility of a ‘rainbow’ finish on some models – though expect this to be subtle if it appears at all.

Slightly less convincingly we may also have seen the iPhone 11R in the wild, appearing in the reflection of a Galaxy Note 10 Plus. It’s not the best of looks, but it shows the redesigned camera that we’re expecting.

An unknown leaker seems to have leaked two phones at the same time: the Galaxy Note10+ and the iPhone XR 2019 in the mirror. 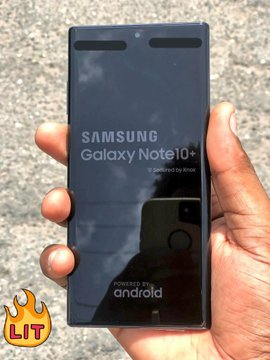 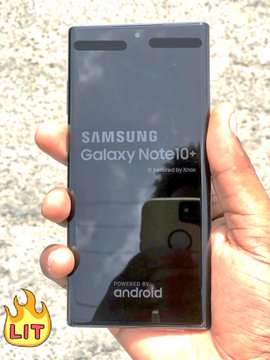 As for the display, rumors suggest that will stay at 6.1 inches and continue to use LCD, rather than OLED. However, it’s said that the screen could sport some improvements, such as better anti-aliasing. Both the screen and the back glass might also use new shatter-resistance technology. So don’t expect a big change here. Think subtle.

This is the biggest change we’re expecting for the iPhone 11R, with rumors not just pointing to a new square shape, as detailed above, but also to an extra lens, with the iPhone 11R thought to have two rear lenses, where the iPhone XR has just one.

It’s possible that it could even have three, as some phones in the range reportedly do, but two is looking the most likely number for now.

It’s expected that these lenses will both be 12MP, but a source claims that they will be ‘new’, suggesting some upgrades.

It’s not clear what roles the two lenses will serve – one is expected to be a standard lens, but the other could either be wide-angle or telephoto based on leaks (with the iPhone 11 Max getting all three). If we had to guess, we’d say the 11R would get the telephoto lens, as the iPhone XS had a main and telephoto combination. One report has also said as much.

We’ve also heard that the image signal processor might be enhanced and that the front-facing camera will be boosted from 7MP to 12MP, and will incorporate an extra layer of glass to improve the quality of photos.

According to one source, the iPhone 11R could have a 3,110mAh battery, which would make it around 5.7% larger than the 2,942mAh one in the iPhone XR. That’s not a big jump, but then the iPhone XR already has the best battery life of any modern iPhone, so that might be all it needs.

Elsewhere, respected analyst Ming-Chi Kuo has said to expect a battery increase of around 5%, which tallies with the rumor above, so they could well be on to something.

As for charging, while some early reports suggested Apple might move to USB-C, most rumors point to Lightning remaining. This is believable, especially in the case of the iPhone 11R where Apple will be trying to keep costs down.

The iPhone 11R might charge fast though, with claims of an 18W charger potentially coming in the box, though elsewhere we’ve heard that it will stick with slow 5W charging, so we’re not sure what’s true here. If we had to guess, we’d say faster charging on this basic model is unlikely.

Moving on to core specs, Apple is sure to include a new chipset, likely to be dubbed the A13. We have had our first glimpse at the performance of that chipset in a benchmark that appears to be for the iPhone 11R. The listing claimed a 2.66GHz Hexa-core chipset (up from a 2.5GHz one in the iPhone XR) and 4GB of RAM (up from 3GB in the XR).

The phone achieved a multi-core score of 11,294 (which is broadly in line with the iPhone XR) and a single-core one of 5,415 (which is significantly higher).

Storage meanwhile could come in at 64GB, 256GB and 512GB capacities, or 128GB, 256GB and 512GB, depending on which rumors you believe – though in both cases it’s not clear whether all iPhone 11 models would get all these sizes or not.

As for the operating system, that’s sure to be iOS 13. What the phone almost certainly won’t have is 5G.

For a snapshot of the iPhone 11R’s possible specs and how they might compare to the rest of the range, check out the image below. The specs listed here appear to be taken from numerous leaks and rumors, many of which we’ve covered above, but it’s a good way to see all three possible phones at a glance.

This year, it’s all about the cameras! If you’re upgrading this year, which model would you get? #iPhone11 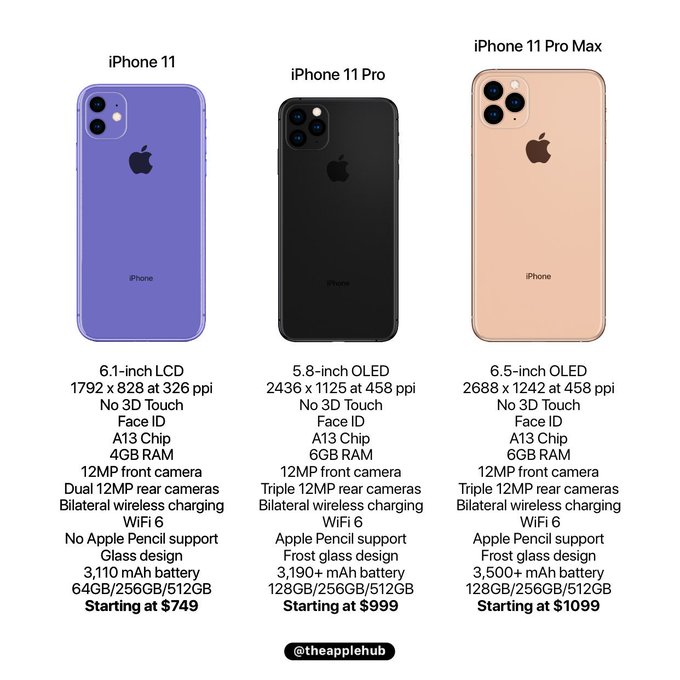 The iPhone 11R is sure to have Face ID of course, but it could be even better this year, with one source saying that it will work from a wider range of angles.

Beyond that, we’re moving into the territory of unlikely things. It’s rumored for example that at least some iPhone 11 models will support the Apple Pencil, and we’ve even seen a case emerge for the iPhone 11 Pro with an Apple Pencil slot, but we’re not convinced, and if any do, the iPhone 11R will be last in line.

We’ve also seen patents for a camera designed for underwater photography, and an in-screen fingerprint scanner that would let you place your finger anywhere on the screen to unlock the phone. But patents often don’t get used, and if these ones do we’d think they’re too premium for the features to appear on the iPhone 11R.

One feature that was rumored but has apparently been put on a hold was a walkie-talkie mode that would let users send text messages even when there’s no signal, by using long-distance radio waves. But it sounds like if this feature ever arrives it won’t be ready in time for any iPhone 11 models.

Which is the best iPhone

Which is the best iPhone